*The intent of this summary is not to replicate the bylaws but to provide a brief summary of key points.
Readers are advised refer to the current bylaws for full details of the USACICS organization.

CARB representatives join an equal number of CELL representatives to form the US Advisory Committee for International Carbohydrate Symposia (USACICS). The USACICS was originally incorporated in the State of Illinois on October 4, 1982 and the original bylaws remain mostly unchanged. The USACICS is currently incorporated in the State of Michigan (as a general not-for-profit incorporation).

The USACICS holds the funds that result from any surpluses from ICS in the US, and promotes carbohydrate chemistry and biochemistry, for example, with sponsorships for graduate and post-doctoral students.

It also sponsors the R. L Whistler Award in Carbohydrate Chemistry that is presented at ICS events every two years in one of the countries that is a member of the ICO. Because there are currently 33 member countries, there are fairly long periods between ICS in the US. Previous meetings have been in 1972 (Madison, Wisconsin); 1986 (Ithaca, New York); 1998 (San Diego, California) and 2016 (New Orleans).

ICS events are under the aegis of the ICO, an Associated Organization of IUPAC and an Interest Group of the International Union of Biochemistry and Molecular Biology, see figure above. The USACICS represents the ACS and US to the ICO.

USACICS Taxes for the year 2021 have been submitted and accepted by the IRS.  For inquires, contact Peter R. Andreana, Secretary/Treasurer at peter.andreana@utoledo.edu. 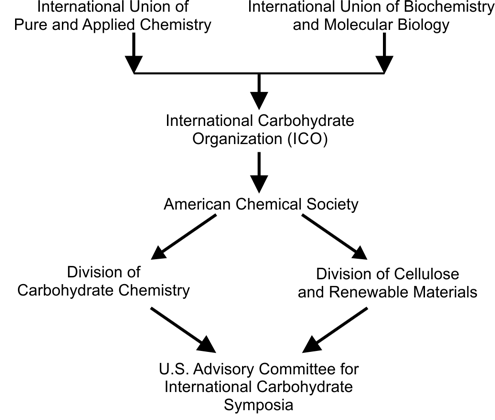